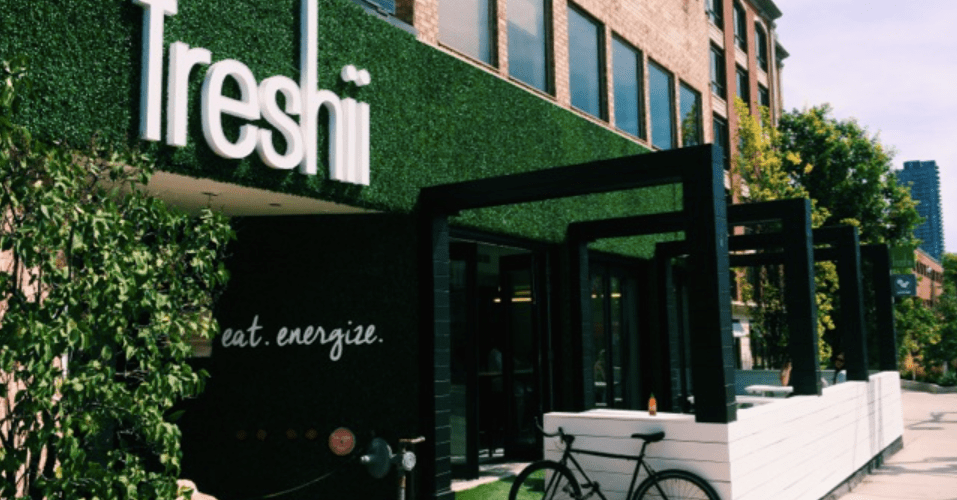 Behind the plant-forward menu of Freshii

Ever sit down and consider all that goes into creating a restaurant menu? What if 50% of that menu involved plants? That is exactly what the plant-forward menu at Freshii is all about. The 200 unit Toronto based fast-casual restaurant chain doesn’t have deep fryers and 50% of the menu contains raw, or lightly steamed vegetables according to Frehii’s resident nutritionist, Andie Shapira. Shapira, 26, studied nutrition at Toronto’s Institute of Holistic Nutrition and leads the chain’s menu development and innovation. Though Shapira doesn’t consider herself a vegan, she is keen on eating plant-based and considers herself a flexible vegan.”The main part of my diet Monday-Friday is predominantly plant-based. My body adapted to it and I like the way I felt and stuck with it”, says Shapira.

I had the opportunity to interview Andie in hopes to learn more about Freshii’s menu development; from sourcing ingredients to concept testing and reducing their carbon footprint. We also discussed the chain’s growth plans as they expand internationally at rapid-fire pace.

Would you say Freshii is a plant-forward concept?

Yes, ½ of our menu is plant-based and we try to reduce our (carbon) footprint as much as possible.

With new local food distributors popping up across the country are you able to source local produce year round in cold regions?

We use a combination of approved local suppliers across North America. In the summer and fall, we partner with local farmer’s markets and hold mini farmer’s markets on weekends at select locations. We also use the leftover fruits and veggies from the market.

What is Freshii’s philosophy on animal-based ingredients?

Our head of supply chain, Jenny Hoshiaon will ensure all suppliers are regulated and act in accordance with the Humane Slaughter Act and all meat is hormone free. Our eggs are free range/cage free and I’m almost positive the meat is as well.

Do you source from ethical farmers? If so, how do you know they are ethical?

Jenny visits suppliers to ensure keeping up with Freshii’s standards.

Do you have a commissary or is everything prepped and made at each location?

Everything is made in back of the house, even sauces and salad dressings. One of my favorites is our Greek yogurt ranch. Our ranch has 8 total ingredients and Greek yogurt is the base, which cuts the calories in ½ and provides a protein boost.

How many times a year do core menu items change?

We don’t change our core menu too often, but at most, once a year. However, various times a year we are introducing new ingredients for testing that are separate from our LTO’s (limited time offers), which take place four times a year. In fact, menu 6.0 just launched this week, which involved many changes to our core menu. We did a complete overhaul and added some new items.

How does a LTO make it to the core menu?

We test in our corporate stores before we launch something chain-wide for 2-3 months, then we will launch with the whole system. A lot of times only one aspect of a LTO will stay on the menu. For example, the falafel bowl was introduced in Q3 of 2014 and only the falafel stayed on (the core menu) as a plant-based menu item. When people request that they want it back, we will bring it back – we will always accommodate our guests.

Any new items you are particularly excited about?

Yes, we have a new pesto bowl that contains spinach, feta, cherry tomatoes with a pesto sauce on top. It is not heavy, though you may tend to think pesto would be. It’s green, refreshing and served on rice noodles. We’re also launching a dairy-free protein base for our smoothies in Q3 or Q4. Is the pesto bowl gluten-free since it’s made with rice noodles? What about the pesto – is there dairy in it?

Yes it is gluten-free and the pesto is made with dairy.

What is the biggest trend in foodservice that you see today?

I think the biggest trend is health and wellness. I think that consumers are concerned less with calories and fat and they want the right type of calories, healthy fats and good carbohydrates. Consumers are continuing to be more knowledgeable in what they are putting into their bodies – there is a total shift in the way society looks at food. Restaurants are taking notice to make sure they are offering cleaner menu offerings, as people are much more cautious these days with what they are putting into their bodies.

Is this a lasting trend in your opinion?

Do you think a lot of consumers are misinformed with the true meaning of terms such as “Non GMO”, “gluten-free” etc.?

Yes, a lot of people think a gluten-free diet will help them lose weight which is not the case at all – or they go vegan to lose weight and it can be true, but not always, because you are eating a lot of carbs and not all vegan foods are healthy. I think its 50/50. There are a lot of consumers that just jump on the bandwagon and a lot that are actually educated.

Say I eat plant-based and I haven’t tried Freshii before, why should I go?

I think that you should go to Freshii because we offer a wide range of menu items and everything is customizable. You can swap out cheese, for example, for beans and request a different sauce with no additional charge. As a vegan, anyone can customize their menu items and literally get something different if you went everyday.

Do you think you have too many feature items that guests could be overwhelmed?

No, I don’t. We have four main categories and maybe 5 suggestions in each category and I think people like that about our menu – that we have so much variety.

What are some vegan options offered on the menu at Freshii?

We have tofu, falafel, a variety of beans, and all of our bases are vegan including: lettuce, brown rice, quinoa and rice noodles. Our whole wheat and green (collard greens) wraps are also vegan. All of our plant-based ingredients (if cooked) are prepared in water and are vegan.

Do you separate the vegan menu items from the animal-based ingredients?

Yes, the vegan ingredients are prepared away from the animal-based ingredients. The utensils, cutting boards etc. are all washed after each use as well.

Freshii doesn’t use deep fryers, right? How is the falafel made then?

What is your favorite fast-casual restaurant to eat at when you are not eating at Freshii in the states?

I do not get to the states too often, and if I did, I would probably still eat at Freshii. That’s the beauty of it, pretty much everywhere you go you can find a Freshii to eat at.

What about in Canada?

Freshii would be my go-to.

Freshii is known for its bowls, salads, wraps, burritos, juices, smoothies, breakfast and frozen kefir. Freshii was founded in Toronto, CA in 2005 by Mathew Corrin and is privately held. Today Freshii operates over 200 stores in 80 cities and 20 countries, with the bulk of their locations in Chicago and Toronto. Freshii has recently expanded into Target stores in Chicago and soon to be Southern California and is slated to have over 350 units by the end of 2016. For additional information or to view their full menu visit their site here.