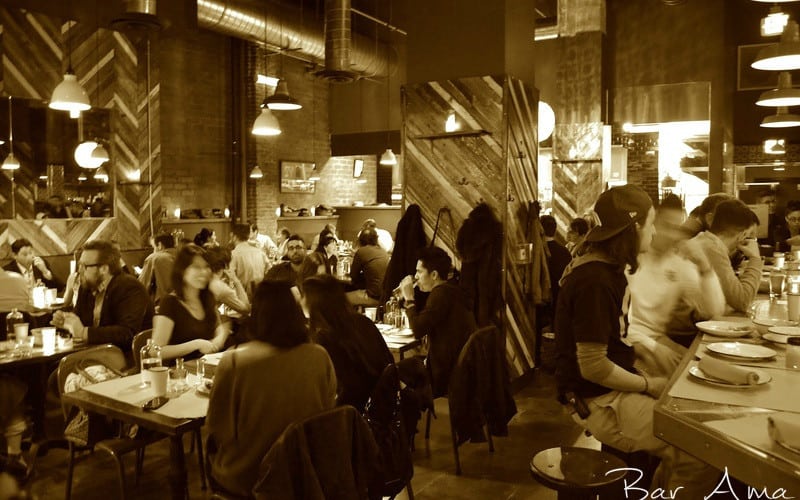 I fell in love with LA the first time I visited back in 2001. It was spring break and we were going to be contestants on The Price is Right. As we drove down Hollywood Blvd I swore I would move to the city of flashy lights and golden beaches as soon as life afforded me a chance.

Turns out life had other plans for me.  I still reside in Chicago. However, as fate would have it, in 2010 I took a job which provided me the opportunity to visit Los Angeles five or so times a year and for extended periods of time. Needless to say, I ate and drank my way through the city.  It is my favorite thing to do after all. Below is an ongoing list of Los Angeles bar and restaurant recommendations that I find to be more than pleasurable. Each restaurant has plant-based options for you planty-pants out there!

Here’s a few tips for you veg-heads out there. If you are struggling with how to eat vegan/plant-based while out at conventional restaurants, have no fear. Wherever you see butter, cream/milk or cheese listed in a particular dish, just ask for it to be omitted. The exception to this rule is if the cheese or dairy is a main ingredient in the dish such as lasagna or Alfredo sauce. When you see cheese on salads, veggies, grain dishes or pizzas, simply ask for them to remove it. It’s as simple as pie! Also watch out for fish sauce at non-veg Asian restaurants. It sneaks into a lot of their cooking.

The Strand House– Just steps from Manhattan Beach is The Strand House- a gorgeous restaurant with an even better view. Go for wood fired pizzas, seasonal American fare and a buzzing brunch.  Be sure to check out their culinary masters series for special Chef collaborations if you can snag a ticket

Baco Mercat – Over 50 Mediterranean inspired small plates make Baco a sought after destination for LA natives and visitors alike.  I’m especially in love with the entire section dedicated to flavor packed vegetable creations. Go with a group and be sure to try a couple Baco and at least 4 of the veg options

Bar Ama – (pictured above) Another Josef Centeno concept located steps away from sister restaurant, Baco Mercat. Bar Ama is Tex-Mex cuisine presented in the oh so trendy, small, sharable, plate format. House-made tortillas and salsa come with your meal and vegan options available upon request. Any place that makes their own tortillas is fine by me

Elf Cafe– Head just a little North of downtown LA for a true hipster experience; vegetarian hipster at that. Elf makes a killer vegetarian pot pie in the winter months and uses specialty ingredients from around the globe. Many menu items can be made vegan or gluten-free. Stop in for brunch, dinner or a few drinks and appetizers. Stay for beard spotting.

Crossroads– Chef Tal Ronnen’s upscale vegan restaurant in WEHO is the place to be seen and to see. My first time there I dined next to Pam Anderson. The second time, Ellen DeGeneres, Portia De Rossi and James Van Der Beek!  The food is fresh and flavorful and the bar is plentiful.  Be sure to try the beet salad, “chicken Parmesan”, a glass of the Pinot Noir and the cheese plate.

Bamboo Thai Bistro – If you know me, you know how much I love Thai food.  Bamboo Thai Bistro located in East Redondo Beach, has some of the best Drunken Noodles in the area and they make a mean fresh roll. Beer and cocktails are just $3 each and the green papaya is a gem

Gjelina – Every time I visit LA, I make a cameo at Gjelina. I also order the same thing each time: a vegan wood fired pizza paired with the Tuscan kale and fennel salad sans cheese, an order of the wood-roasted cauliflower, braised fava beans and a couple glasses of the Bordeaux style blend. It makes for one killer meal

Pizzaria Mozza– Silverton, Batali and Bastianich really nailed it with Pizzaria Mozza. Serving guests simple Italian fare with a large emphasis on quality and sustainable sourcing. Mozza dishes up incredible wood-fired pizzas (try the Tomato, Sicilian Oregano & Extra Virgin Olive Oil option), luscious desserts and a killer Barolo by the glass in an inviting, laid back environment. The original is located right outside of Hollywood and sits next to Michelin rated sister restaurant Osteria Mozza

Joom Bangkok Cafe – Some of the best Thai restaurants are found in nondescript strip malls.  Joom Bangkok Cafe is located right across from CBS studios in Hollywood and is easy to miss, but do not pass it up. Head to Joom for their cute & cozy decor, a great green papaya salad and a dinner special which includes an appetizer, soup or salad, entree and dessert for a whopping $10.00. Think I’m joking? Go try for yourself

Eveleigh – Conveniently located on the Sunset strip in West Hollywood, this bright and earthy restaurant immediately invites diners into it’s warm embrace. Fill up on trendy farm to table American cuisine, seasonal craft cocktails and adorn unique antiques while you nosh. Get the shaved fennel with English peas and an order of the patas bravas

The Bazaar by Jose Andres – Super trendy, super fun and super great. It’s a real Beverly Hills scene. You can indulge or ignore it, but definitely go. Arrive early, hit the bar for some gastronomical concoctions, nibble on traditional and modern Spanish tapas in the restaurant and head to the Patisserie to experience dessert. Chef Andres studied under Ferran Adria and knows his stuff. Be sure to order two of the apple & fennel, two of the guacamole stuffed jicama and the LN2 Caipirnha for a real treat

Native Foods- Another rapidly growing fast casual vegan chain whipping up classic American fare with a focus on health and sustainability. Go for crave-worthy salads, exotic bowls and meatless burgers so good your meat loving friends will thank you . Start with an order of Native Nachos to share and finish with the oatmeal creme pie. Rumor has it, Native Foods has plans to reach 200 stores by 2019. Heck yeah!

Real Food Daily– Seasonal organic vegan cuisine with fresh pressed juices, smoothies and milkshakes. Yes, I said milkshakes! Go for lunch or brunch and save room for a few of their house made desserts. Be sure to try the Great Cardini or Caesar salad, a bowl of seasonal soup and the breakfast burrito. Catch Real Food Daily at one of their three LA locations or grab some before your flight in terminal 4 at LAX

Shojin – Head to one of Shojin’s two LA locations for organic, vegan, macrobiotic Japanese grub. Think veg sushi, salads and a prix fixe brunch that is tasty and affordable. Try the kale Caesar salad, an order of shisho gyoza, a few rolls or opt for their 8 course $40 tasting menu to get the full shebang

PizzaRev – Thin, Roman style pizza made your way with over 30 toppings to choose from. They happen to have Daiya cheese for the vegan and lactose intolerant among us. Enough said

Thai Vegan – Super fresh and super inexpensive Thai food in a laid back, cozy setting. I’ve been to the Santa Monica location and it is a gem!  Their second location is in nearby Marina Del Ray. Try the Green papaya salad, Fresh Veg Roll, Massamun Curry and Soy Sauce Noodles

Cruzer Pizza– 100% vegan pizza. It was actually one of Daiya’s first vegan cheese customers in the LA area. I personally got a recommendation from Moby to eat at this restaurant while attending the Mercy For Animals gala in 2014. So if Moby likes it, you should too

Gracias Madre – Organic, plant-based Mexican cuisine that is fresh, flavorful and created with passion. Located in West Hollywood Gracias Madre serves a killer weekend brunch; try a warm lemon scone, chilaquiles and a chimichanga. For dinner try the pozole and el plato with an order of guacamole. Actually, order one of everything. They make their own tortillas from local maize (corn) and have a vegan flan on the menu. Can we go there now?

The Rainbow Bar and Grill –  Kind of divey, kind of awesome. Rainbow serves Italian- American fare and a killer well drink. If you only go once to say you went, it’s worth it as it’s where many of the iconic rockin’ rollers of our time got their start

The Viper Room– You have to catch at least one show at the Viper room. It’s where many famous bands get their start. You can be a part of history. Also, River Phoenix died out front. For the 90’s children that are reading this, that is Joaquin Phoenix’s late brother

Skybar at Mondrian – Sometimes you need a little dose of the posh life. Skybar, an open air loft perched above the Pool at Mondrian boasts killer views of Los Angeles and is a super chic scene. Head over during the day to lounge with a few cocktails and stay through the night for a true Hollywood nightlife experience

Know any exceptional LA restaurants and bars that we need to check out? Send me an email or leave a comment below!